Skip to the end of the images gallery

Skip to the beginning of the images gallery

Be the first to review this product

The Apple iPhone X is one of the most groundbreaking launches from Apple as far as both technology and design are concerned.

Get the best deals and discounts on smartphones prices in Oman. For more future updates on iphone Oman or any other apple smartphones in oman  please do follow Cleopatra Web

The Apple iPhone X is one of the most groundbreaking launches from Apple as far as both technology and design are concerned.

Each and every department is richly fed with the most that you could get. And since the new iPhone X loses the home button and the fingerprint scanner on it, the FaceID is what replaces it, big time.

The Apple iPhone X, launched alongside the iPhone 8, has a stunning display that eventually turns out to be the stand-out feature with an edge-cutting super Retina, bezel-less 5.8-inch screen. The sharp resolution of 1,125 x 2,436 pixels enhances the crystal-clear viewing experience. The dazzling full-sized screen is as immersive as never before.

This new iPhone 10 employs elegantly-curved corners and a small space on the top of the screen that houses the front camera and the ground-breaking technology, the Face ID. Wrapped in a surgical grade steel and durable glass, the new iPhone is ever so sturdy, and water and dust proof at the same time.

The Apple iPhone X uses a powerful processor, which is being considered as the most reliable ever seen on an iPhone. The device has a 2.39GHz Monsoon dual-core processor along with a 1.42GHz Mistral quad-core processor.

The processors are further coupled with a 3GB RAM. Moreover, the introduction of the newest A11 Bionic chipset, that works in tandem with the attached quad-core CPU, along with a dual-core performance booster makes it around 25% faster in performance than its predecessor.

All of the goodness of an Apple camera is now a part of the iPhone X. It could well be the art of photographic excellence simplified. It has got the dual 12MP cameras on the rear panel which holds the fastest and largest smartphone camera lens ever. These fast sensors, optical image stabilisation (on both cameras), back-illuminated sensor and 1.8f aperture will make every shot a masterpiece. The 7MP front camera also has the goodness of a BSI sensor and Retina flash.
As other iPhones, the iPhone 10 does not have an external storage option. But the 64GB internal storage more than makes up for the loss.

The Apple iPhone X is powered by 2,716mAh Li-ion battery which claims to deliver a backup of around 21 hours. It is enabled with wireless charging and quick-charging. Moreover, in terms of the connectivity, the smartphone comes with a 4G SIM slot, advanced Bluetooth v5, A-GPS with Glonass and NFC.

Apple is well known for its size and revenues. Its worldwide annual revenue totaled $265 billion for the 2018 fiscal year. Apple is the world's largest technology company by revenue and one of the world's most valuable companies.

More Information
Reviews
Write Your Own Review
Only registered users can write reviews. Please Sign in or create an account

We deliver for free in Muscat.

Our products are genuine & top quality.

We are here to answer your queries.

Your data is always protected by us. 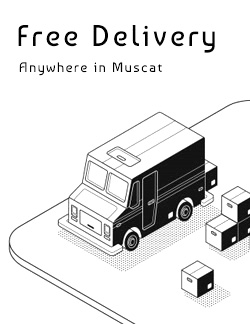